In the shop we have our hands working on restoring 2 pianos.  One is a 1915 Conover Cable model 77 grand piano.  The second piano is a Knabe grand piano.  These pianos will be posted for sale upon completion of the restoration.

Here are some highlights and photos of both pianos.

Brief history –  The value of a Conover-Cable piano is often similar to that of a Mason & Hamlin, Chickering, Knabe, and in most cases to the value of a Steinway.   In 1880, the Conover Company was established in Kansas City, Missouri.  By 1890, Conover and the Cable company merged to form the Conover Cable Company.  By 1904, The Conover Cable Company had the opportunity to save the Mason and Hamlin Piano Co. from bankruptcy and opened a new branch of the company.

The Conover Cable Company was known for their five different grand models listed below: the Model 66 which is 5 feet 5 inches, which also was called the “Fairy Grand”, the Model 77 around 5 feet 10 inches, the Model 88 which is 6 feet 4 inches, and then two which had Mason & Hamlin plates modified to show the Conover logo.

Where did this piano come from?  I received a notice from one of our tech’s that Music Connection in Forest Lake had taken this piano in trade and it was not saleable.  They wanted a tech to remove it from their inventory and restore it.

Once we agreed that I could have the piano for restoration, upon arrival in my shop i took some pictures of the overall condition of the instrument.  As you can see, most areas of the piano needed to be restored including keytops, action parts, strings and refinishing.

Today, we have completed action rebuilding, restringing, new damper felt and soundboard refinishing.  It plays like a dream and this piano has often been labelled as the ‘poor man’s’ Mason Hamlin / Steinway.  We believe that if not told, a person hearing the piano tone would believe it to be a concert Steinway.

Here’s some photos of the piano after being repaired with new action parts and new pins and strings. 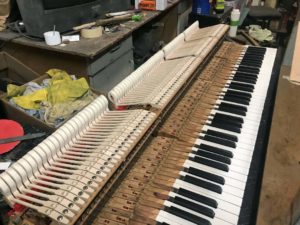 February 2018 we  received an order to refurbish a Haddorf upright console piano.  This piano is in a desperate need of cleaning the inside, polishing the strings, whiting the ivory keys, repairing one sharp keytop and repairing action parts as currently the hammers are not moving. See the complete video of the restoration. 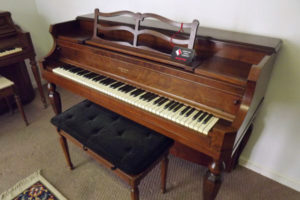